SAVE THE DATE: Online-Round Table „Enhancing European Democracy – Next Steps Following the CoFoE” 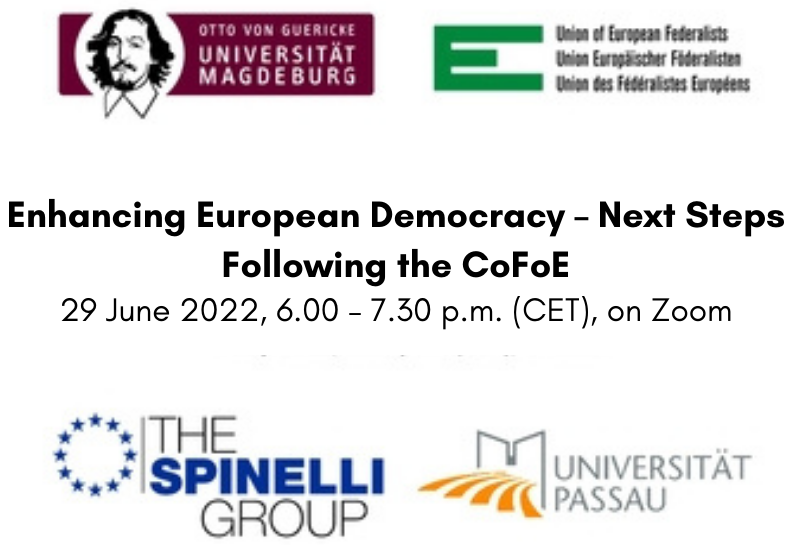 Whether the EU suffers from a democratic deficit is one of the few debates of European Studies, which reached a wider public. Quite a number of Europeans are concerned about the  state of EU democracy. They feel less influential, unrepresented, and too far removed from what is going on in “Brussels”. Public support for populist parties mobilising on EU-sceptic grounds has sustainably shaped recent elections and challenged the resilience of European democracy. Enhancing European democracy has been one of the key issues addressed by the Conference on the Future of Europe (CoFoE). Now an ambitious and wide-ranging follow-up is required to meet public expectations and not to lose citizens’ trust in both the CoFoE and European democracy. The EU’s main institutions have to initiate a process that leads to a meaningful and effective use of the conference’s results and further progress in democratic innovation. The round table deals with the important question of what steps have to follow to ensure that the CoFoE as a democratic exercise in citizens participation is successful. What kind of citizens recommendations are to be picked to initiate concrete reforms enhancing European democracy?
Which ongoing EU reforms such as the European Parliament’s initiatives to reform the European electoral law and to enshrine the “Spitzenkandidat:innen” process have the public support to be delivered?